As you explore the world of The Long Dark, you'll notice aurora are often present in the sky, appearing and disappearing according to some unknown set of natural rules. Besides acting as a hauntingly beautiful reminder of what has transpired, the Aurorae also have an effect on the world around you. 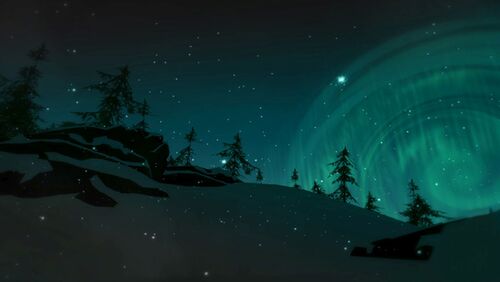 During flare-ups of Aurora activity, there can be so much electromagnetic energy that some electrical devices within a localized area might become powered. This manifests as streetlights suddenly flaring up or pulsing with light. Record players or radios suddenly begin playing music, or static, or emergency broadcast messages. Television screens might become lit up, even if they can only broadcast test patterns. Light bulbs are especially susceptible to this since they simply require an electrical charge, so entire streets or town blocks can become illuminated in an unpredictable fashion.

This can make exploration more rewarding, but also potentially more risky. Locations like hospitals, police stations, banks, that use electronic security systems and vaults, might suddenly become accessible again in the presence of an active Aurora, vs. inanimate bricks you have no chance of disturbing. These places can also become traps for the unwary, or unlucky. Sudden flare-ups can trigger unexpected fires that can catch you by surprise. Or you may find yourself plunged into darkness, scrambling for a light source.

Shortwave radio communication might work, but only during periods of relatively little atmospheric activity. It might be possible to make contact with more distant locations, but such communication would be highly unpredictable. Incoming electromagnetic interference, or spikes in the amount of interference, could get picked up on a basic handheld radio. Spikes in static would suggest an incoming “flare”. Seeing static man-made light sources in the distance would also typically be a sign of heightened electromagnetic activity.

A night-time sky filled with highly active Aurora would be bright enough to navigate by without requiring additional light sources. It might also interfere with compasses, or hide the night-time stars to the degree that familiar constellations or navigation markers like the North Star are no longer visible.