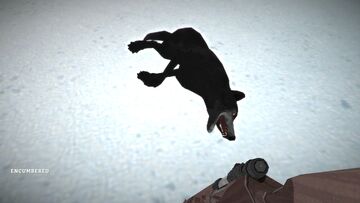 A wolf as it should be and deserves to be.

Wolves are a dangerous ever-present factor in sandbox mode. In the current game, wolves wander alone or near another wolf; there are no true "packs." They can spawn in certain buildings, but this is very rare. A wolf will attack your character if you wander too close. 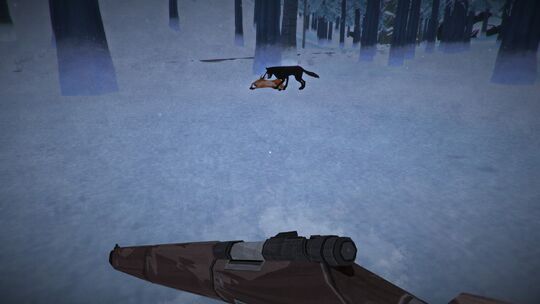 Wolves usually spawn and roam a pre-determined "territory", changing it from time to time. While inside his "territory", the wolf will wander randomly, and will hunt other animals it detects, except for other wolves. They usually kill deer and feed on the carcass, leaving behind a small amount of meat, the hide and guts. If they catch a Rabbit, however, they'll eat everything. Nearby wolves may be heard howling and growling, they only bark when chasing the player, so watch out. Wolves will run from any Bear that it comes across. Another ideal feature to note, if you have an encounter with a wolf and he circles you in a passive-aggressive state (even if you have no light source). Check the surrounding area for a carcass, if one is found, walk in the opposing direction and walk around, he will target the carcass instead.

Wolves detect the player the same way they detect everything else.

Avoiding and Defending a Wolf Attack

As soon as the Wolf detects the player, he will bark loudly and begin moving towards the player. If available, you can fend the wolf off by lighting a Torch, which might scare him or keep him at bay temporarily. Having high condition will increase the likelihood that the wolf will stay away. A player that is suffering from any affliction, overcumbered, tired, hypothermic, hungry or dehydrated will probably not be able to scare the wolf, and will be attacked. Flares will also keep wolves at bay temporarily and can scare wolves if thrown at them. It's important to note that Flares and Torches aren't foolproof ways to keep wolves away, and if given time to stalk the player they will still charge regardless. The player can also run from the wolf and try to escape him, or find shelter inside a building or a car. If you have a Hunting Rifle, you can try to aim in the middle of the wolf head a deliver a headshot, which will kill him instantly. Missing the shot might scare it if it's far away, but if it's close, it will not; hitting any other part of his body will make him flee injured and bleeding, causing him to slowly die from bleeding. 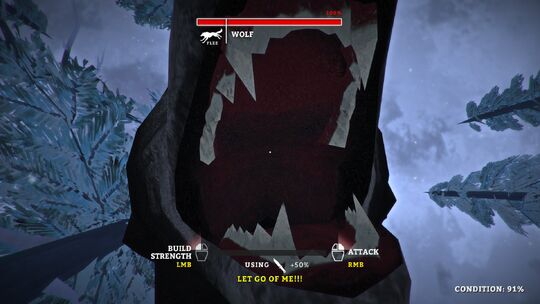 If you are attacked by a wolf, you will enter a sort of "bullet time" where the game slows down and allows you to choose a weapon with which to fight the wolf. This bullet time will not activate if you do not have any weapons. Picking sharp weapons such as the hatchet or knife will cause major bleeding damage to the wolf, but won't immediately scare it off. Picking a blunt weapon such as the heavy hammer or pry bar will do blunt damage, meaning that the wolf will not bleed but it will be scared off faster. Using a sharp weapon is better if you want to kill the wolf to harvest it, and using a blunt weapon is better if you want to scare it off faster and receive less damage.

Once you pick a weapon, the game will begin moving at normal speed, a bar will appear, and you will be prompted to click your left mouse button. Clicking faster will fill the bar quicker, so players should click as fast as they can. Filling the bar to the top will immediately scare the wolf off, but the wolf can also be scared off at any time depending on the damage it sustains and regardless of the current bar progression.

Being attacked by a wolf will damage the player and cause condition to drop drastically. If your condition reaches 0 before you can scare the wolf off, you will die. In addition, being attacked has the chance to give you one or more of the following afflictions:

The players death will always be the last thing to happen, but all other afflictions can happen in any order, any number of times, during the wolf attack

It's been observed that in Pilgrim difficulty, wolves may initially face the player and bark, as if to charge, and may even move towards the player. However, within a certain distance, wolves will instantly turn around and retreat, much like if a Flare was thrown, a Torch was brandished, or the player fought the wolf off during an attack.

Like any corpse, the wolf will begin to freeze if let too much time exposed to the environment. If it freezes enough, a hunting knife or hatchet will be required to collect loot. Wolves can provide:

The pelt can be used to craft the Wolfskin Coat after left to dry indoors for seven days. Four Cured Wolf Pelts are needed to make to coat, along with four Cured Guts.

It is best to avoid wolves as best as you can. Most of the time you can see them before they see you, meaning that you can give them a wide berth. Having raw meat or other animal products such as hide or gut can increase the likelihood that they will detect you, so be sure to keep that in mind when moving around. Additionally, wolves generally spawn in pre-determined areas. This gives you the opportunity to avoid those areas or at least move more carefully when close to them.

if detected, wolves will bark and begin moving towards you. When you hear this bark, you need to decide what you are going to do. If you are close to shelter, you should begin running towards it. Cars and houses that you can enter are the best shelters. Some ruined houses have patios or areas outside where wolves aren't programmed to enter, so these can help you. Cliffs that wolves can't traverse are also good; getting on top of a large, steep rock where the wolf can't reach you is sometimes your only option. You should know that generally you cannot outrun a wolf if they are charging, so breaking their line of sight and gaining distance before they charge is in your best interest.

If you can't run, using a torch or flare can keep them at bay temporarily but not forever. Throwing rocks at a wolf may scare them away as well. Shooting a rifle or distress gun will scare them off if they are farther away and not charging, but if they are close and coming at you this won't work. If nothing works and you are attacked, using a blunt weapon (if you have one) is usually in your best interest, as it will scare them off faster than using other weapons. If scared off, you should begin moving away from the wolf. Even if you scare the wolf off, you can still die soon after. Not having a bandage or antiseptic to treat your wounds will likely kill you. Losing a lot of condition from the attack and then dying from something else is not uncommon either. Finding shelter nearby to recover from an attack is often a good idea. 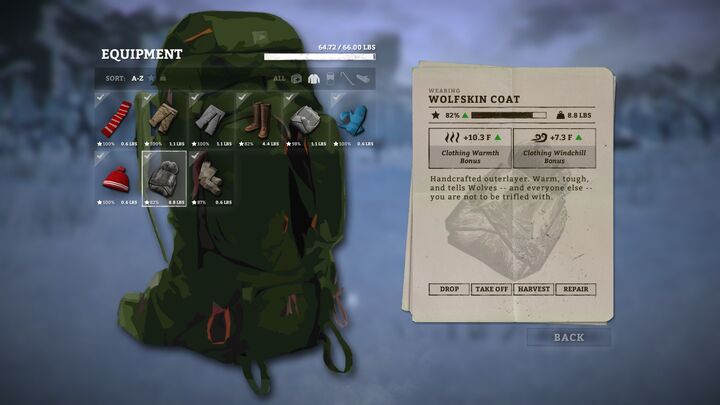